Rise of the Hardbodied Woman

The Changing Perception of Women and their Bodies 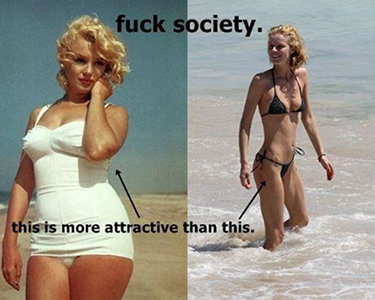 According to this image, voluptuous women used to be the pinnacle of the female form, but now the ideal has shifted to the lithe. To be sure, the BMI of the ideal woman has moved downward [2]. But now, another shift is happening. A new type of woman is becoming the ideal for society: the hardbodied woman. This shift has significant implications for women and their perceived role in society.

Over the past several years, a new kind of woman has become not just socially acceptable, but desired: she is lean, muscular, and athletic. This is evident across American culture. The recent media obsession with the female Olympians in London is a perfect example. The internet went nuts over Michelle Jenneke, the Australian hurdler with a unique â some would say outrageously awesome â warm-up routine. The YouTube videos of her alone have over 26 million views. [3] 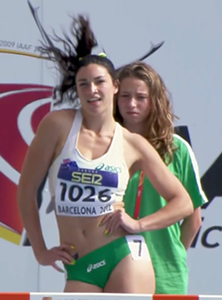 Ms. Jenneke and a rather concerned young lady [4]

Beyond the attention given to Ms. Jenneke, there are countless articles on the sexiness of the female Olympians [5] [6] [7]. These Olympians are truly ideal hardbodied women; they are the greatest athletes in the world, and have similarly extreme physiques.

If you look elsewhere, you'll find a bounty of love for hardbodied women. America's First Lady Michelle Obama is frequently lauded for her muscular physique; she's even rocked out pushups on national television [8] [9] [10]. Pinterest, the rapidly-growing photo sharing social network, is filled with photos of hardbodied women (and the unstoppably dreamy Ryan Goslingâ¦but that's neither here nor there.) A quick browse on Pinterest's "Fitness & Health" feed won't present you with thin, supermodel-esque women, but â almost exclusively â hardbodied women [11]. Shredded women. Women bodybuilders. Reddit â the popular link-sharing website â has a female-centric "hardbodies" community with 20,000 subscribers, the same as its college football and parenting communities [12][13][14]. On BodBot, almost 30% of our female users have selected goals to gain muscle or get strong. Furthermore, we have consistently gotten positive feedback from women about the women in our photos, all of whom are athletes and many of whom were/are in college athletics. There's even been an impact on language. The term "skinny fat" has entered American vernacular, defined as "A physique, while not overweight (and possibly underweight), lacks any visible lean, striated tissue." [15] While this term denigrates thin women, it nevertheless values the hardbodied woman. "Strong is the New Skinny" is a phrase that is gaining popularity; its Facebook page has 67,000 likes and a myriad of shirts with that phrase are being made [16] [17] [18] [19]. 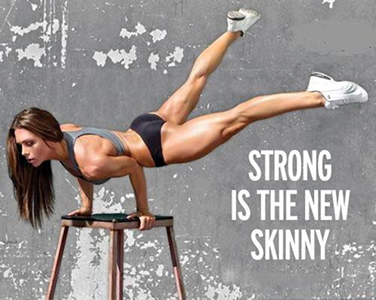 A photo of a muscular woman featuring the newly popular phrase. [20]

The hardbodied woman is far from a fringe, niche interest, and its popularity is only growing. Beyond being "just another aesthetic ideal," this has significant implications for women as a whole. The idealized female form has far less to do with pure aesthetics than it does with the associations that society has about that form. At any time, the idealized female form represents the traits that society most values and expects about women. During the 1950s, the nuclear American family was idealized and childrearing was highly valued; the nuclear family was seen as what made Americans superior to the Soviets, who were seen to have horrific lives in factories as their children were neglected in day care centers. In the US, it was the era of the "happy homemaker" â women who chose to work when they didn't need to rather than raise their children were considered selfish [21]. It is no surprise, then, that a more voluptuous, "fertile" figure was appreciated.

The ideal female form fluctuated over the subsequent decades, but the decline of the nuclear family ideal â and rise of the feminist movement â has resulted in a diminishing of expectations exclusively toward female fertility and mothering. And with the farcical abundance of unhealthy food (e.g. the KFC Double Down, which defies all laws of God and man) and the rise of obesity during the last two decades, a thin physique is valued [22] [23]. During the modern era, the thin ideal comes from â among other factors â a Puritanical belief in women exerting self-control, far more than that which is expected of men. Women giving into their desires â gluttony and lust, in particular â is taboo, while such traits are at times even glorified in men [24] [25] [26]. With the current ease of gaining fat, being thin is being in control of one's desires.

These past ideals are associated with traits that make women in some ways not on equal footing with men. They're associated with a woman caring for a man's children or not embracing any of their desires while a man does not have such restrictions. The valued traits of the hardbodied woman, on the other hand, have absolutely nothing to do with men. The whole point of the hardbodied woman is that she is physically capable. This woman wouldn't need a man to do anything. She's independent, strong, and capable. On top of that, she can beat the crap out of a grizzly bear.

The hardbodied woman blurs gender roles. The idealized man and woman have historically been quite different from one another. But the hardbodied woman is effectively the same as the idealized man: both are muscular, physically capable, and implicitly independent. The frequency of muscular women being viewed as negatively "man-ish" is diminishing. This convergence implies that society is beginning to value and expect some of the same traits out of both men and women. 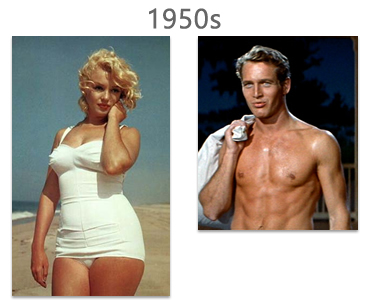 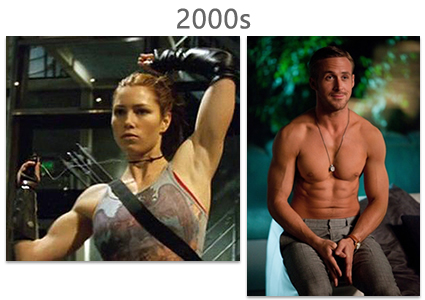 Key to this trend's significance is the fact that the associations that society has with the idealized woman are not just just applied to those who look like the ideal woman at the time. The idealized woman just has physical attributes which society associates the most with its perception about women as a whole. In the 1950s, all women were seen as having the purpose of raising children, not just the voluptuous ones. In the same way, with the rise of the hardbodied woman, all women are becoming seen as independent, capable, and strong.

There are challenges with this trend, however. First, it maintains an objectification of women, despite the aforementioned positive associations that come from it. Additionally, just like the Facebook image at the beginning of this article, some supporters of hardbodied women are setting those women apart from â and superior to â other women. Such an approach supports a very narrow view of female beauty and asserts that anyone different is not attractive [31].

The above image - which has been repinned countless times on Pinterest [33] - is an example of this approach. It's great to encourage people to be healthy and health should be sexy. However, it's also suggesting that skinny women are not sexy. This not only is unnecessary negativity towards others, but such an approach can also draw out unhealthy body image issues. Placing paramount importance to be at any physical state â in the belief that they will otherwise be grotesque â can cause people to make self-destructive decisions.

It does appear that the hardbodied woman is becoming an ideal in our society. This trend highlights certain traits that society is coming to value in women â independence, strength, physical capability. While there are challenges around body image, it will be interesting to see how far this trend goes, and whether it will overtake "skinniness" as the aesthetic ideal for women. Of course, if you want to be a hardbodied woman yourself (or reach other fitness/health goals,) get a free personalized fitness plan for it here at Bodbot.

[31] Smith, Jocelyn. The Master: The Life of a Graduate Student, "The day I declare all women BEAUTIFUL, or why YOU are beautiful, full stop.." Last modified 2012. Accessed August 22, 2012. http://jocelynthemaster.blogspot.com/2012/02/day-i-declare-all-women-beautiful-or.html. The final paragraph of this post is relevant to this citation.